Ketterdam: a bustling hub of international trade where anything can be had for the right price–and no one knows that better than criminal prodigy Kaz Brekker. Kaz is offered a chance at a deadly heist that could make him rich beyond his wildest dreams. But he can’t pull it off alone…

A convict with a thirst for revenge.

A sharpshooter who can’t walk away from a wager.

A runaway with a privileged past.

A spy known as the Wraith.

A Heartrender using her magic to survive the slums.

A thief with a gift for unlikely escapes.

Six dangerous outcasts. One impossible heist. Kaz’s crew is the only thing that might stand between the world and destruction—if they don’t kill each other first. 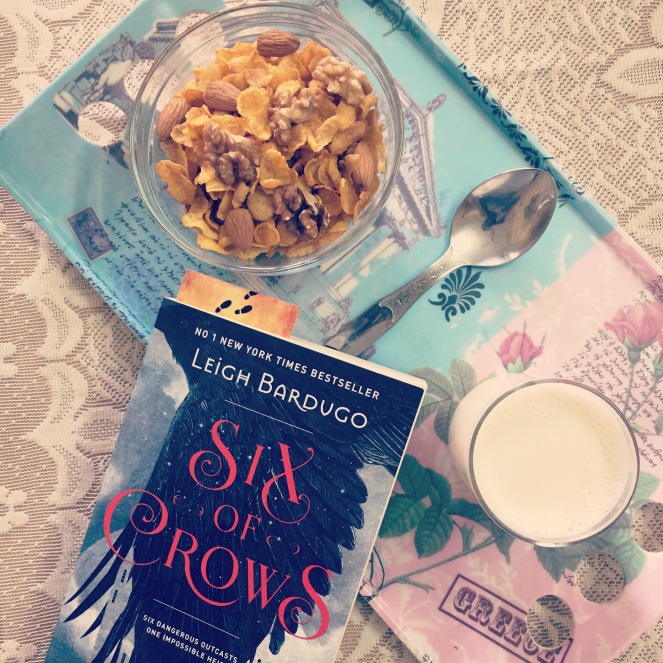 This book is about six outcasts, each completely unique and talented, each with their own baggage, that come together to take part in a heist. This book is set in the same world as Leigh Bardugo’s Grisha Trilogy.

The book might be a little slow to start, but when Kaz’s crew is assembled and they set out on their journey, it gets so good(I mean FREAKING AMAZING!!).  We get to follow all of their perspectives except one. They are all so unique and well developed and we get to know their backstories and how they became who they are now. The characters will make you fall in love with them. The plot of the book is fantastic and fast-moving. You will flip through the pages so quickly. I loved all the characters so much that by the end of the book I wanted to be a part of their crew so badly.
Kaz is such an interesting character. He is someone who thinks 10 steps ahead and the way he handles every situation and leads the entire crew is just so amazing. He is like the leader of the crew. But you also get to see what’s underneath this total badass character. Inej, a spy so good at her job that she’s known as “the Wraith”. She is such a strong and driven character. She is definitely one of my favorite characters. The way she works through her weakness and never gives up, speaks a lot about her character. You can’t help but fall in love with her. Matthias is one of those characters that you struggle to trust. I liked the relationship between him and Nina. There was a lot of history there and it was interesting to know the things that they have been through together. Wylan is one of those characters with so much mystery surrounding him and his father that makes it hard to judge his intentions. You don’t get his perspective, but you still get to know him through other characters. I loved his relationship with Jesper. I would definitely love to know more about Jesper and Wylan in the upcoming book.

Overall, the writing style was so fantastic and the characters were beautifully done. I gave this book a 5/5 stars. Absolutely recommended this one and I can’t wait for Crooked Kingdom. Definitely one of my favorite reads of 2017 so far.

View all posts by Ashwini Ganesh