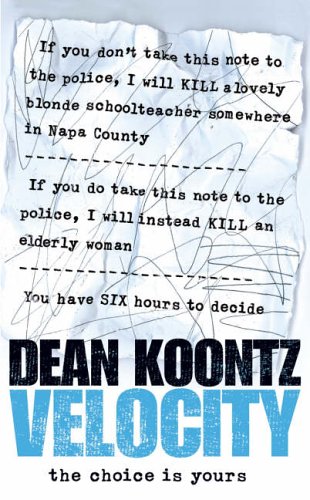 Pain is a gift. Humanity, without pain, would know neither fear nor pity. Without fear, there could be no humanity, and every man would be a monster. The recognition of pain and fear in others gives rise in us to pity, and in our pity is our humanity, our redemption.
– Dean Koontz, Velocity.

Bill Wile works in a bar and has pretty much a normal life, until one day he finds a  note under the windshield wiper of his car.
“If you don’t take this note to the police and get them involved, I will kill a lovely blond school teacher somewhere in Napa County. If you do take this note to the police, I will instead kill an elderly woman active in charity work. You have six hours to decide. The choice is yours.”
He thinks it’s a hoax, but decides to take it to his friend on the police force, Lanny Olson. Lanny also thinks it’s a sick joke and asks Billy to ignore the note.
A school teacher dies. In less than twenty four hours Lanny gets the news that a blond school teacher has been strangled to death. Billy is devastated on hearing this, and blames himself. Soon after that he receives the second note. If he takes the note to the police, a mother of two young children will die. If he doesn’t, an unmarried man who won’t be much missed will die. This time the deadline is shorter than the previous one. Lives of people are hanging in balance and someone is going to get killed irrespective of his choice. Suddenly Billy’s oh-so-perfectly normal life seems to have turned into a nightmare. The killer then starts communicating with him, and each time his choice marks the end of someone’s life. The deadlines become tighter and the people involved become more personal. Now, Billy has to fight against the odds to save the intended targets from this psychopath. So the story is about all the trials and tribulations that he faces when he sets out to find the killer and confront him with the evidence.

I have heard so much about Dean Koontz, and this is the first time I picked up one of his works. Maybe this book wasn’t the right choice. Billy’s character was likable and smart, but I would have loved if there were more details about the background of the psychopath(I don’t want to spoil anything for you guys!). I really enjoyed that Barbara’s character was crafted so beautifully. All the other minor characters did their part to add to the story and suspense.

I really enjoyed the writing. I love thrillers when you can just fly through the pages. There were few lines that made me cringe, but that shows how well the author has shaped up the character of the psychopath. Apart from that I really enjoyed the words of wisdom by Billy that were originally from the work of T.S. Elliot.

The world turns and the world changes, but one thing does not change. However you disguise it, this does not change: the perpetual struggle of Good and Evil.

I have heard people saying if you like Stephen King, then try Dean Koontz. Maybe because of that my expectations were really high. If you’re trying Dean Koontz’s books for the first time, just like me, I would suggest you to pick something else. I wouldn’t say this book blew my mind, but it wasn’t bad either. I feel this may not be one of his best works. If you love thrillers, and are looking for a fast-paced thriller with lot of action, then do pick this one.

Hope you enjoyed this post. I would love if you can suggest some of his books that you guys enjoyed reading.

View all posts by Ashwini Ganesh